My Mindful Approach to the 3 WORST Pieces of Advice EVER! - Movement-Rx

My Mindful Approach to the 3 WORST Pieces of Advice EVER!

Ever hear the term ‘consider the source?’ I kept having to remind myself of that phrase with my mindful approach to the worst advice I ever got.

Everyone loves to give advice…yet considering who it is coming from is crucial.

As a young fastpitch softball player, all the fathers, other coaches, and sideliners loved giving me tips on how to throw faster, or more accurately. However the ONLY person I listened to was my actual pitching coach. She was the professional in the fastpitch arena.

While the fathers, coaches, sideliners all had good intentions, they were not pitchers. 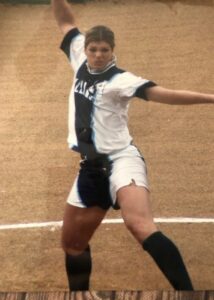 (Picture from my junior year at Villanova University. Batter up!)

To bring this back to you…

While considering the source can and will save you a lot of questioning of yourself, the most important act you can take is taking time to get to know and love yourself.

As my late father – a former Catholic Priest and commodity broker – would say, the longest trip anyone may ever take is from their head to their heart.

This trip has been long and arduous for me, however I am making that trip…tripping, falling, and always getting back up.

And this is why I want to share with you the worst advice I have ever received, as I know NOW these people who gave it were actually doing the best they can despite the hurtful, ignorant, seemingly stupid things they said.

Sadly their best had some holes, yet we all have holes. Some are just deeper than others.

Hence, when you truly know and love thyself, considering the source becomes easier and you are able to respond with empathy and let go much faster.

The way I have become more empathetic is through my own mindfulness meditation practice, behavior research, my faith, and the people I interact with the most…

So here goes the 3 worst pieces of advice I have been given and the mindful approach I took to this advice.

1: “If you got pregnant you would feel better about yourself. “

Said a psychiatrist in the Navy who knew nothing about eating disorders, or what kind of ‘trauma’ I was dealing with. This person mistakenly felt that my issue resolved around feeling bad about my body.

Considering the source- he was a staff psychiatrist who worked primarily with dependents to Navy and Marine corps service members. He never worked with addictions like eating disorders…only alcoholism.

He didn’t know…so he just spoke through the lens of what he did know.

My mindful approach in response? It hurt to be so misunderstood…yet years later, when having gone through much personal development, I came to realize he represents a large group of people who just do not understand this group of addictions/diseases called ‘eating disorders’. It is not a ‘having trouble eating’ brownies or going-to-buffets type issue. It runs so much deeper.

I realized people need more education about this and this psychiatrist’s response was simply an example of cognitive dissonance.

2: “There can only be one star in a company. You can either be the star or work for the star.”

Said a handful of folks I have worked with in the fitness space.

It was really interesting to observe.

Considering the sources- the individuals who expressed this to me appeared to be more into how people viewed them than actually running their companies. They seemed to all have shiny object syndrome, were very competitive with anyone who entered their arena, and obsessed over who was who in their industry or what celebrities they knew.

Here’s the thing that stood out the most. They never acknowledged the people that helped them get to where they were – their team.

To create a business that has a legacy…it takes creating many stars on the team to keep it going. And the legacy is not what you leave behind, but who and what you push forward.

If you were gone, would your business last?

“Great things in business are never done by one person, they are done by a team.” – Steve Jobs

When the folks who were chasing the stardom and the flashy opportunities fell off, I kept grinding, working through the struggle, and building my team beside me.

This grind has brought me in front of some of the most successful companies our world has ever seen and I get to work with humans who are the best of the best in the service and now their industry.

“Persistence isn’t very glamorous. If genius is 1% inspiration and 99% perspiration, then as a culture we tend to lionize the 1%. We love its flash and dazzle. But great power lies in the other 99%.” -Susan Cain author of QUIET

3: “You need to be louder to be an effective leader.”

Said my company commander at Officer Candidate School (OCS), followed by many other superiors of mine in the Marine Corps.

While I graduated at the top of my OCS class, I was far from loud. As a matter of fact, when I yelled it sounded more like a quiet scream…

Considering the sources – these Marines were trying to help me use my voice volume to be effective in OCS, and there’s a default belief in the Marine Corps that loud is leadership. I got that.

I did what I had to do to make it through OCS and landed at the top of my graduating class.

My mindful approach – I learned to create an authoritative and firm voice when needed vs loud. I also learned I can be quiet, charismatic AND an effective leader.

I learned over time there was nothing wrong with me even though I was not loud, I found out I was an introvert yet one who can perform. I just need space to re-charge.

I learned through my first mindfulness meditation coach who – was also an introvert – that “your body and mind find balance in stillness and quiet.”- Jim Cahill

This was so true. In quiet, I gain my power, and it allows me to live life out loud. 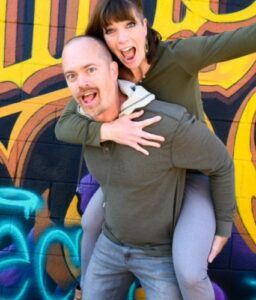 (Our faces describe what can go on inside. Picture taken by Emily Blair)

While I have built and will continue to reinforce my healthy mindfulness practice, I still struggle, get hurt, and let words sting sometimes. I am human.

There have been moments where I wonder how smart I really am. Especially with some of the relationships I found myself in. However in those relationships good, bad or otherwise… came wisdom.

I have also thought I wasn’t good enough at times and tried really really hard to prove I was good enough to coaches, teachers, friends and some family. That approach is NOT life-giving and not helpful.

The same same way I let it define me I also let it go. 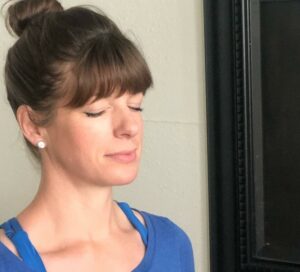 The most important part about the the advice above is that those statements were just words – literally just HOT AIR coming out of one’s mouth – directed at me by people who were or are part of my life. I can choose to do with those words what I want.

The very practice that has helped me the most to be able to move beyond the story, stick to the facts, and take ownership of my mind is mindful meditation.

The very practice that has helped heal my body and literally move forward in my life after every major or minor setback, physical or mental, is mindful movement.

Mindfulness and movement together gave me the actionable skills to change the story and take ownership of the actions I take on a daily basis.

It is a process not a pill. In my experience it’s the most invigorating and freeing medicinal process you can give yourself.

Want to move better, eat better, learn to meditate, and feel connected to others on the same journey?

Join the 21 Day Mindfulness Experience, with myself, Jon Macaskill, Retired Navy SEAL Commander, and our team at Movement Rx, by signing up below.

Learn more and or sign up here: 21 Day Mindfulness Experience

We are excited to be on this journey with you.

Yoga with Will Schneider on Salesforce Military Wellbeing Series

5 Easy Steps to Improve Your Physical Health Through Mindfulness