How I Fixed My Knee Pain - Movement Rx

How I Fixed My Knee Pain

I USED to have knee pain. Not anymore. Below is the story of how I fixed my knee pain, including access to the free guide of a few of our best exercises for knee pain.

My story of fixing knee pain

In my mid-30s couldn’t walk stairs without pain.  It seemed like it was a sudden change from my earlier athletic life, but in retrospect the onset of pain had been building for a while.

I had been a collegiate and professional athlete, so hobbling up stairs was a major fall from grace.  I had read the stories of old pro football players similarly hobbled by knee pain. But those guys were linemen, linebackers, running backs – guys who carried a ton of weight and got hit in the knees daily.

I was a quarterback.  I thought my knees should be different – I didn’t have the knee wear and tear those guys had.

But I started to accept it as I settled into my career and commute.  Knee pain led to inactivity which led to a pound or two or three a year in weight gain.  When I tipped the scales at 35 pounds over my playing weight I decided I needed a change.  So I went for a jog, thinking I’d just grit through the discomfort.

I remember that jog well, all 50 meters of it.  I got across the street, took a right and had to stop.  I was embarrassed.  And pissed.  I apparently had forgotten how bad it felt.  As I looked down past my extra weight towards my knees I resolved to find a solution.

Sound familiar in some way?

I told myself I could solve anything.  Shoot, I had been an Academic All American quarterback in the Ivy League.  I went to a top-ranked business school and was a Managing Partner at the firm I worked for.  I could figure this out.

So I found the best of the best of orthopedic knee surgeons in LA – the folks that worked with the Lakers and Kings.  My surgeon – a very qualified and well-meaning fellow – found I was missing most of the articular cartilage under my kneecaps.  Beyond chondromalacia to bone on bone knee dysfunction.

The a-ha moment, I thought.  I was going to fix my knee pain.

Pre-operative physical therapy sessions were scheduled, followed by a 15 minute procedure (microfracture in my case).  Followed by 9 months of knee rehabilitation with a physical therapist.

No difference in pain or function.  Whatsoever.

The surgeon’s response?  I’m paraphrasing here, but he essentially said “Looks like we did not get ALL of the gunk in the right knee, so why don’t we go back in and optimize that?  And oh by the way let’s do the other knee, too.

Image of Isaiah Whitlock’s character on HBO’s The Wire

I did not know what I was going to do, but there was no way was I going through surgery and rehab again.

I obviously had not gotten to the core of the issue.  The biomechanics of my knee were a function of something else that led to a series of responses by my body that eventually manifested as lost cartilage.  The ortho does surgery – lost cartilage was his trigger to think SURGERY.  The physical therapist got a post-op knee patient – follow the insurance-OK’d plan until the coverage cap is met.  Each reacted to the cues they had been taught in their healthcare silos.  The knee pain exercises I got were similarly silo’d.

Nobody at that point had pieced together what we now call the Pyramid of Physical Freedom. 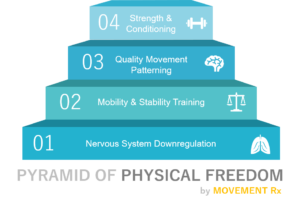 So for 2-3 years I slogged through, painfully and slowly jogging on soft surfaces, swimming and trying leg presses and cycling through motivation and discouragement.  I was 40 but my knees were at least 80 years old.

During that time I met my wife.  I was lucky in so many ways.  The most relevant of which are that a) she was getting her doctorate in physical therapy and b) HATED rules.

As a world class athlete and iconoclast, she knew traditional physical therapy centric rehab was missing something.  As her spouse I got to be her guinea pig as she tried different types of knee pain exercises.

The knee pain techniques she tried eventually got me feeling pain-free enough to try Crossfit.  Our first class was at 6500 feet in Colorado Springs.  I nearly blacked out doing air squats it the onramp class, but it got me moving again.  It also led to an exchange with one of the coaches there on how to squat. It was innocuous at the time, but in retrospect it was a real moment of change.

I had squatted all my life – I played football collegiately and professionally. I squatted 500 pounds in college.  I KNEW how to squat…or so I thought.  The CrossFit coach in Colorado taught squats the way I knew how.  As my wife watched me she flatly told the coach he was teaching poor technique, biomechanically speaking.

That exchange led to me finally getting to a root cause – poor movement patterns.  Over the following weeks, when she guided me on correct patterning, I could FEEL the improvement in my knees.

Mind you, it was a slow process for me.

(We have since created a program to help others get out of knee pain MUCH FASTER.)

At first, the knee pain would return – usually the next morning.  But as I kept active and built strength, the pain resolved for longer periods.

Keep in mind – I still have NO cartilage under the kneecaps.  I still have a diagnosis, but the problem is going away.

We moved to San Diego, joined CrossFit Invictus (arguably the best known CrossFit gym on the planet), and I got to a point where I could do most functional movements without pain – squatting, deadlifting, cleans, burpees, lunges, etc.  But running and jumping still caused knee pain.

I had already gotten hip to lacrosse balls and foam rollers, but was not using them effectively.  During this time my wife’s expertise had grown, and we started getting PRECISE about WHERE and WHEN to do tissue work.  And more importantly for me – WHERE and WHEN to build stability in the smaller supporting musculature.

I had re-learned to recruit major muscles but a number of smaller muscle groups were basically ‘turned off’.  So for several months I did core, hip and glute stability drills until the cows came home.

By the end of it jumping and running were rarely an issue for me.  My knees would occasionally flare up, but hot damn I was willing to accept a week of swelling over months of nagging pain.

But my physical therapist wife wasn’t OK with the swelling.

There had to be a way to avoid the inflammation, she reckoned.  Some additional exercises for knee pain to solve the swelling.

She had been looking into the ways breathwork and meditative practices were effective in calming the central nervous system and had been following research on such downregulation’s impact on inflammation.

So we tried it.

Now I’m NOT a meditation type of guy.  Maybe I’m too impatient, maybe I associate meditation with Birkenstocks and gurus.  Maybe I’m too uptight.  But breathwork with a specific goal of eliminating my knee pain?  I was totally into that.

Trial and error led to a combination of breath with tissue and stability drills that made my body feel like a relaxed, well oiled machine.

In retrospect, we approached the whole thing backwards.  Fast forward to today – we built a program based on these principles.  We call this combo of principles the Pyramid of Physical Freedom.  The program is aptly named The Knee Fix.

It’s 8 weeks long (as opposed to the 7 years I spent) and provides the step by step guide to getting out of knee pain.

Learn more about how The Knee Fix can help you.

Click here to learn more about The Knee Fix

My Knee Pain No Longer Affects Me

I know I’ll never dunk a basketball again, and World Cup glory is out of reach.  (Well, it was never IN reach.)  But I am in my mid-40s and I can move how I want.  And barring some freak accident I will continue to move how I want for the rest of my life.

7 years ago I feared stairs.  Today?

I sling on the Osprey pack and lug my 35 lb son on hikes without a worry.

I chase him in the park.

I can hang with the 20 somethings in CrossFit classes (usually…ok sometimes).

My wife appreciates that there are no limitations to activities of nightly living (you know…fun stuff).

Listen, joint pain is a precursor to so many downstream health issues.  Think about it.  If I remained in musculoskeletal pain I wouldn’t move as much.  I would have been increasingly more sedentary.  That 1-2 or 3 pounds a year adds up, meaning I’d now be 55 pounds over my playing weight with far more stress on my joints.  That weight and inactivity would also place added stress on my body’s systems – endocrine, digestive, neural.

I see it in some of our patient population at Movement Rx.  I see it the facebook posts of my childhood friends.  So many look…old…and unhealthy.  They weren’t as lucky as I was.  There but for the grace of God go I.

So I encourage you to fix that joint pain today.  It just will get harder over time.  One day it will be too late for you. 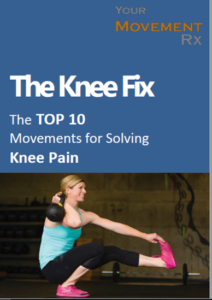 How to Build an Ergonomic Home Workstation

Embarrassed By Your Health?

Your Employees’ Pain is Your Problem